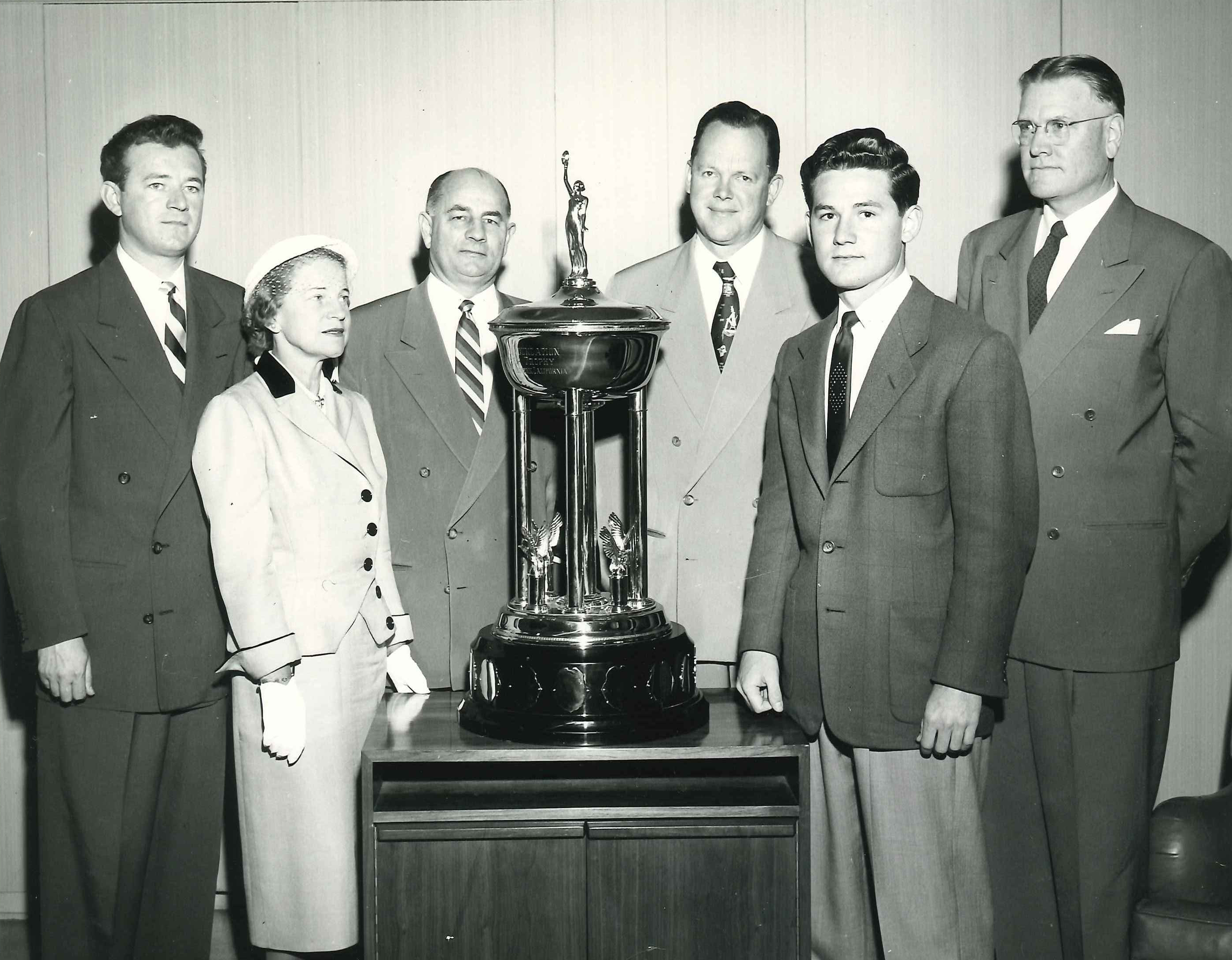 The Balfour Award contains three levels of distinction: chapter, province and international. The process of conferring the different Balfour Awards is progressive, as an award winner progresses from one level to the next.

Each chapter selects its own Chapter Balfour Award winner using the criteria that they feel results in the selection of their “most outstanding graduating senior.” The chapter can recognize a brother who has graduated in December, or who will graduate after the spring or summer term. Either way, the selected brother must graduate in the current academic year. Each Chapter Balfour Award winner receives a plaque denoting his achievement.  Each chapter’s winner is also eligible for the Province Balfour Award.

Recipients must be reported to International Headquarters by Feb. 15.

To report your winner, go to sigmachi.org/chapter-system, login, and select “Membership.” In the dropdown menu, select the “Chapter Balfour Award winner” button and follow the instructions found in the form.

Province Balfour winners will receive a plaque denoting his achievement.

The International Balfour Award has been awarded annually since the 1929 to 1930 academic year when Paul Hagemann, WASHINGTON (ST. LOUIS) 1930, was recognized as the inaugural recipient. The committee that oversees the award selects the individual who they believe to be the Fraternity’s most outstanding graduating senior based on his achievements in scholastics, campus and community involvement, and Sigma Chi involvement.

Applications must be postmarked by April 15.

The Chapter Annual Report and Major Awards Application is a mandatory report that all undergraduate chapters must submit at the end of each academic year. It was instituted in the 2009–10 academic year as a method for chapters to efficiently report on their performance, accomplishments and achievements during the academic year. Essentially, the report acts as a capstone summary and an opportunity for the chapter to inform the Fraternity and their advisors of the chapter’s performance over the course of the previous year. Data from this report is analyzed so that the Fraternity can acquire a better understanding for the common challenges that are facing its chapters. Information from the report is used to select winners of the various annual awards that the Fraternity confers upon its chapters.

The report can be accessed here.

This award recognizes the undergraduate chapter that adds the highest percentage of undergraduate Life Loyal Sigs throughout the school year. The award is named for 18th Grand Consul William C. “Pop” Henning, DEPAUW 1890, who is Life Loyal Sig No. 1.

The winning chapter receives a custom Life Loyal Sig plaque to display in the chapter house, as well as a $1,000 scholarship from the Fraternity to be used for one of the following purposes:

The Fraternity presents the Charles G. Ross Award to the undergraduate chapter with the most outstanding publications program. Criteria include the inclusion of content concerning undergraduate and alumni news, writing and editing, layout, general appearance, and the frequency and quality of publication. The award is named for the late Significant Sig Charles G. Ross, MISSOURI-COLUMBIA 1905, newsman and press secretary to US President Harry S. Truman. The winner of this award is chosen from newsletters that are mailed to Sigma Chi Headquarters between June 1 and May 31 of each year. To be considered for the Ross Award, send copies of your chapter’s newsletters to Headquarters at 1714 Hinman Ave., Evanston, IL 60201.

The James F. Bash Significant Improvement Award — funded by 49th Grand Consul James F. Bash, BUTLER and INDIANA 1946, and his wife, Connie — is given to chapters that demonstrate major improvement in total chapter operations from year to year. Significant improvement is defined as a gain of at least 25 percent in the score ascribed to a Peterson Significant Chapter Award application from one year to the next. All chapters that apply for the Peterson will be considered for the Bash Award; therefore, there is no separate application for this award.

This annual award honors the undergraduate chapter that has the most outstanding scholastic achievement program. The winning chapter receives a plaque and has its name engraved on the Daniel William Cooper Award trophy on display in the Sigma Chi Museum at Headquarters. Recipients of this award are chosen from the pool of Peterson Significant Chapter Award applicants.

Every year RMF recognizes up to ten (10) chapters that best exemplify sound risk management practices in their chapter operations with education and life safety grants in the amount of $1,000.

The online application, which is due in early May, is available on the RMF website here.

The Peterson Significant Chapter Award, sponsored annually by the Sigma Chi Foundation, is the highest honor that the Fraternity bestows upon an undergraduate chapter. Named for 38th Grand Consul J. Dwight Peterson, INDIANA 1919, the award recognizes excellent, but not impossible, performance by chapters in all major areas of operation and programming. For many years, the Peterson plaque has been a symbol of dedication, idealism and achievement.

There is no minimum or maximum number of chapters that may win the award in any given year. Award criteria are assigned on an objective scale and encompass the entire gamut of chapter activities, from financial stability and recruitment, to chapter and member reputation, to Ritual and Initiation performance. Because chapter operations vary among campuses and chapters, each chapter measures itself against these absolute Sigma Chi standards, rather than against other chapters.

J. Dwight Peterson Significant Chapter Gold Award
To achieve this award, chapters must achieve a 97 percent or higher on the score ascribed to their annual report. These chapters will receive a gold embossed seal on the certificate and be specially recognized at Balfour Leadership Training Workshop.

J. Dwight Peterson Significant Chapter Blue Award
Chapters winning this award will be those chapters that score between a 90–96.99 percent on the score ascribed to their annual report. These chapters will receive a blue embossed seal on their award certificate and will receive the award at Balfour LTW.

The Sigma Chi Foundation is pleased to recognize honorably discharged or currently serving members of the armed forces with its Military Service Recognition Pin thanks to the generosity of the Krach Family Foundation. The White Cross that we wear is an emblem of sacrifice, and the virtues displayed through one’s service to country brings honor to the name of Sigma Chi.

The award may be bestowed upon a brother who meets the following criteria:

If you know of someone who should receive this recognition, or if you would like to request a pin for yourself, please complete the nomination form.

The International Sweetheart of Sigma Chi is a woman who serves as a role model for all of our brothers, and is our Fraternity’s liaison to non-members throughout the world. She must possess an understanding of the values and ideals for which the White Cross stands, and exemplify these values and ideals in her daily life.

Honor your chapter sweetheart at Grand Chapter this year. This is a reminder for undergraduate chapters to nominate their chapter sweetheart for International Sweetheart. The appreciation, pride and care chapters exhibit in the application they create for their sweethearts will be something she will cherish for a lifetime.

Applications for International Sweetheart are available now by clicking here. Submit the completed application by email to awards@sigmachi.org by March 1, 2021.

mark v. anderson character-in-action leadership award
A person of good character illustrates trustworthiness, respect, personal responsibility, fairness and citizenship. Whether a member donates his time and energy to a worthy cause, acts as a role model for the youth of his community or simply goes out of his way to help others, Sigma Chi recognizes this as an act of Character-in-Action™. Such members, who also lead with integrity, are good candidates for the Mark V. Anderson Character-in-Action™ Leadership Award.
Sigma Chi introduced the award in 2005 to recognize the selfless acts of brothers. A formal recognition from the General Fraternity not only applauds these actions, but also allows non-members an opportunity to appreciate the scope and mission of the organization.
The Krach Family Foundation endowed the award in perpetuity in 2007, and now the honor carries with it a grant to assist the recipient in carrying out his selfless actions. The award was endowed in honor of Order of Constantine Sig and past Sigma Chi Fraternity International Headquarters Executive Director Mark V. Anderson, ILLINOIS 1977.

Nominate a Brother for the Award

Do you know a Sigma Chi who goes above and beyond what is expected of him? Does he “walk the talk” and make a difference in the lives of others? To nominate a brother who should be recognized with this award, send an email that answers the following questions to character@sigmachi.org.
Also, please send the name and contact information of someone with whom the nominee has worked while volunteering on the project. This person will serve as a reference.

Dan Shaver, TEXAS TECH 1993, who continues to help his little brother from Big Brothers Big Sisters of Metropolitan Chicago, C.J. Black, years after the two first met. Shaver has helped Black navigate through the challenges of life and has helped him adapt to his days as a collegian.
Richard St.Denis, MIAMI (FLORIDA) 1981, brings donated wheelchairs and mobility equipment to the impoverished in Mexico through his charity, the World Access Project Inc.
For at least six summers, members of the University of Cincinnati undergraduate chapter have volunteered to build homes and schools for those in need in Haiti.
Semi-retired dentist Kenneth Johnson, OREGON 1960, and his wife Dot donated dental services to those in foreign nations and in the Johnson’s hometown of Corvallis, Ore.
To view a list of award recipients, please click here.
grand consul's citations