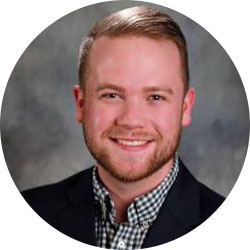 Logan joined the Sigma Chi International Headquarters staff in July of 2017 following a brief stint supporting the Advancement department of a University Foundation. He served as the Associate Director of Accountability until August 2019, when he accepted his current role as a Regional Chapter Support Coordinator. Logan enjoys working with both undergraduate and alumni members to eradicate hazing and alcohol/drug abuse from campuses across North America.

Logan grew up in the Carolina’s and later attended Western Carolina University, where he became a member of Sigma Chi as a Sophomore. He is a Fraternity/Sorority advocate and has volunteered several times as a facilitator for Sigma Kappa Sorority and the NIC’s UIFI program. In his free time, you can find Logan running, volunteering for other Greek-lettered organizations, or playing with his Goldendoodle, Colby Jack.

As a regional chapter support coordinator, Logan works within the Fraternity’s undergraduate services department to provide guidance to its undergraduate chapter and volunteer advisors in fulfilling the goals in their strategic plans. Serving as an ambassador for Sigma Chi, he works closely with the Fraternity’s Grand Praetors, or regional governors, and chapter advisors to assist the undergraduate leadership with various aspects of their chapter’s operations and facilitates relationships between the chapters and university partners. Logan oversees region 6 which includes undergraduate chapters in the Northern Indiana, Southern Indiana, East Illinois, West Illinois, Northern Illinois and Wisconsin provinces.