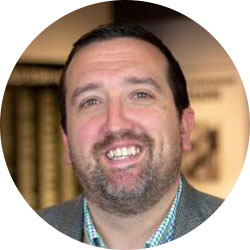 Jim joined the Sigma Chi International Fraternity Headquarters staff as the associate editor of The Magazine of Sigma Chi in June 2008 following a five-year career in sportswriting in the newspaper industry. In May 2012, he accepted his current role and enjoys interacting with undergraduates and alumni through his work with Sigma Chi’s educational programs and through alumni engagement. Jim serves as the lead staff support for the Educational and Leadership Board and the The Jordan Initiative Committee, which works with both the Preparation for Brotherhood and Ritual for Life programs.

He grew up in Utica, Illinois, and later attended Bradley University in Peoria, Illinois, where he became a member of Sigma Chi. He is an avid sports fan, especially regarding the Chicago Bears and Chicago Cubs.

Jim lives in Chicago with his wife, Jenny, and their daugher, Emma.