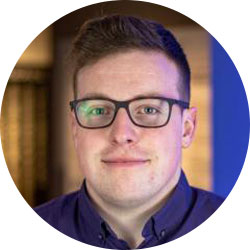 Jared spent his childhood in rural Pennsylvania. Upon the completion of high school, Jared packed his bags, said goodbye to his beagle, and set a course for the “big city.” Attending Rochester Institute of Technology until 2011, he studied computer and software engineering and international studies. During his senior year, after having the opportunity to be part of the founding process of the Fraternity’s R.I.T. chapter, Jared discovered his passion for helping others. Deciding to follow his heart, he transferred to a liberal arts college and earned his bachelor’s degree in psychology. In 2015, he completed a master’s degree in social work, with a specialization in leadership and development in the social services. Jared went on to practice mental health therapy for two years, fulfilling his desire to help others live, heal, and thrive despite having mental health disorders. Recognizing that being a Sigma Chi is a lifelong commitment, Jared jumped on the opportunity to give back to the organization that had been instrumental in his personal development during his undergraduate years. Hoping to use his experience in the social services, he wants to ensure that Sigma Chi continues to be at the forefront of developing leaders, while at the same time spearheading programming to ensure the wellness of all Sigma Chis, the chapter where they are members, and the campuses and communities in which they reside. Jared believes the current academic climate is in need of such a Fraternity and that not only can Greek letter organizations remain relevant, but can reach ever greater heights to affect positive change throughout the world.

As a program administration coordinator, Jared works within the membership development department to provide support for the Fraternity’s various programs, such as the Horizons Huntsman Leadership Summit, Mission 365 recruitment training program and Crossroads drug and alcohol program, among others.