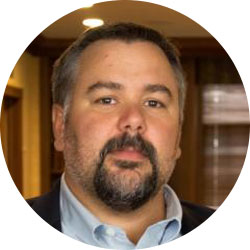 Brad has served widely on Fraternity committees, including Team Balfour, alumni services, and alumni training, and he helped to develop much of the Fraternity’s alumni and chapter advisor training curriculum pieces. He also served for 10 years as chapter advisor of his home chapter at Arkansas State University. Brad has been honored with the Erwin L. LeClerg Outstanding Chapter Advisor Award (co-honoree in 2015) and is a Seven Lights Alumni Award Winner (2017). As an undergraduate, Brad served as Magister and Ritual chairman during a time of chapter expansion. Brad’s degree is in Business Management and he has a background in commodity production in the Arkansas Delta. He lives in Arkansas with his family.

Brad joined Headquarters staff in 2017. In his role as regional chapter support coordinator, he is responsible for supporting undergraduate chapters in the South Central region. He works closely with the Grand Praetors and chapter advisors in the region, and helps facilitate relationships between the chapters and universities. Brad also serves as an ambassador for Sigma Chi in the field and helps mentor undergraduate brothers in his region to do the same. Brad oversees Region 7, which includes undergraduate chapters in the Oklahoma Arkansas, Southern, Central Texas, North Texas and East Texas provinces.