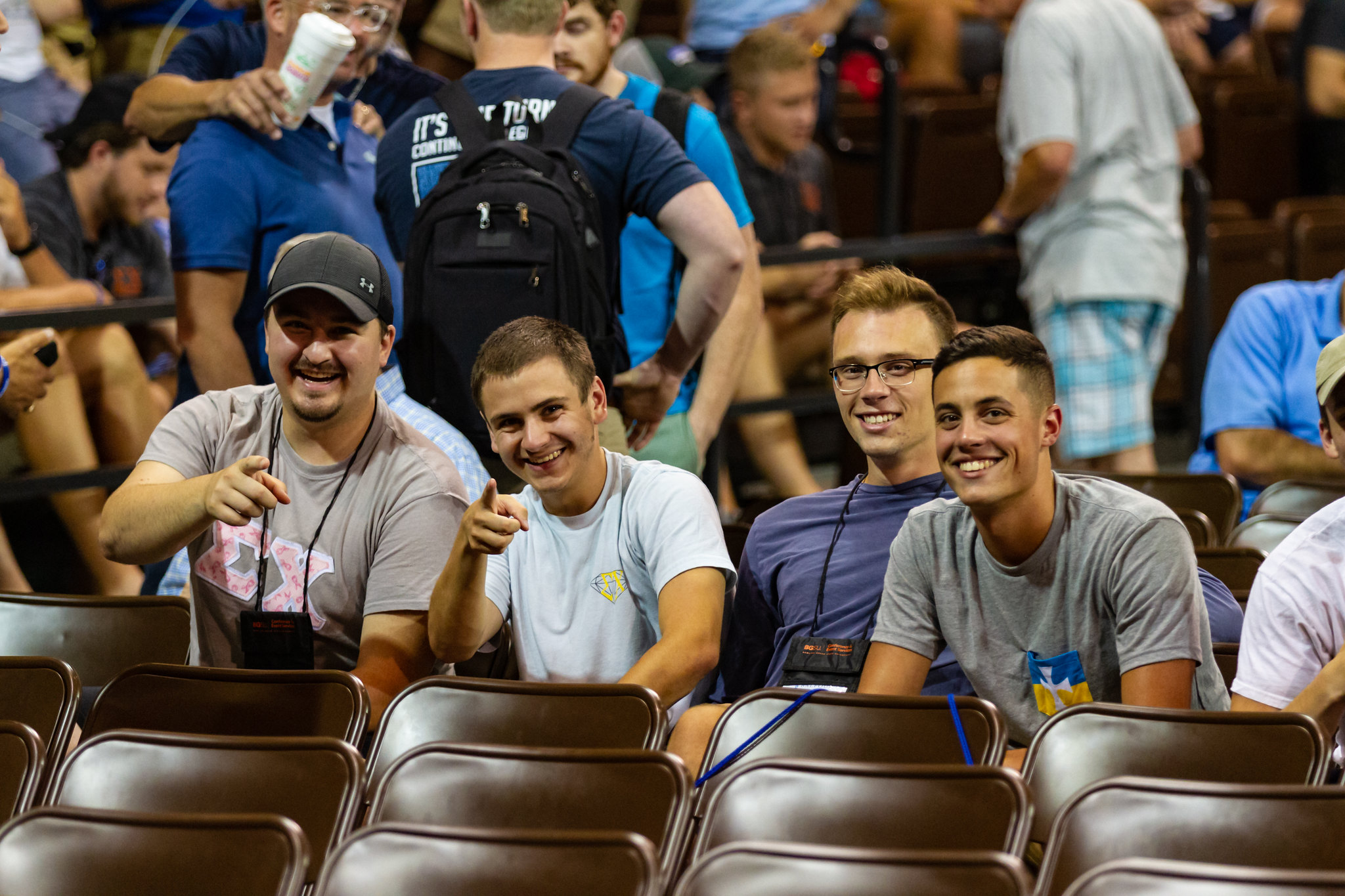 Through values-based leadership programming, academic excellence, community service and philanthropic giving, today’s Sigma Chi reflects the values and principles that inspired our founders in 1855 while leading the fraternal shift away from the rebellious, Animal House portrayal of Fraternities in media at large.

A Sigma Chi endeavors to achieve his maximum potential during his college years and continues a lifelong pursuit of learning for the development of knowledge, wisdom and character.

Sigma Chis are men with different temperaments, talents and convictions who acknowledge, respect and highly value their collective diversity all while sharing a common belief in the fundamental purpose of Sigma Chi.

A Sigma Chi treats others with respect and dignity and believes in the value of all individuals. We do not practice nor condone any insensitive or abusive behavior toward any individual or group.

A Sigma Chi acknowledges and accepts personal responsibilities to his family, community and those who are less fortunate. We volunteer our talents, time and resources to build a better world.

A Sigma Chi conducts himself as a high-minded man and a gentleman, exhibiting integrity, courtesy and loyalty. Our members reject behavior that is dangerous to others, including the use of illegal substances and the abuse of legal substances.

Leadership and Excellence on Campus

When compared with other campus organizations and athletic teams, the impact of Sigma Chis are evidenced by their community service, philanthropic efforts and campus-wide activities.

Sigma Chi has taken a lead role in the fight to preserve the freedom of association rights of college students. In particular, the Fraternity is among the organizations that filed suit against Harvard University over their legislation banning students from single-sex organizations from holding a leadership role or obtaining a fellowship on campus.

Fraternity leadership has met with congressional officials and is proactively encouraging new legislation providing college students with the freedom of association.

Sigma Chi has proactively been a leader with legislation prohibiting hard alcohol in chapter facilities — a decision lauded and implemented throughout the fraternal world.

Members are being rewarded with increased academic scholarship opportunities from the Sigma Chi Foundation and their own chapters, surpassing the $1 million mark for 2018 to 2019.

Sigma Chi also honors the most outstanding graduate senior in each of its provinces, as well as an overall International Balfour Award winner each summer at Krach Transformational Leaders Workshop.

Throughout our organization’s history, undergraduate and alumni members of Sigma Chi have given their time, talents and treasure to change their campuses and community by volunteering for a variety of initiatives.

Whether it’s helping construct homes through Habitats for Humanity, serving the need-based and homeless community with canned food drives or meals, volunteering within local animal shelters or lending a hand in disaster relief, Sigs understand the meaning of giving back.

In 2005, Sigma Chi introduced the Mark V. Anderson Character-in-ActionTM Leadership Award to recognize the selfless acts of brothers. A formal recognition from the General Fraternity not only applauds these actions, but also allows non-members an opportunity to appreciate the scope and mission of the organization.

Here are a few examples of our members, who continue to go above and beyond:

The Flint, Michigan water crisis inspired Feigl-Ding to create toxinalerg.org, a website that alerts schools and communities of high levels of heavy metals in water samples. The public can submit water data so that it appears on an interactive map on the website, making the level of its quality openly assessable. Water testing collection kits are available and can be tested by toxinalert.org to be placed on the interactive map.

Each year, members of the University of Rochester undergraduate chapter spend days in the Dominican Republic building latrines and offering other assistance. It allows them to improve the lives of citizens in need and learn first-hand about poverty. In five years, the Rochester Chapter have constructed a church and 20 latrines, which help residents who were previously walking barefoot through human waste in the streets.

Umstead and his nonprofit, Mr. Tom’s Heart, support a growing list of nonprofits, delivering discarded food and other items of need from area stores such as Costco or Kroger to homeless people, hungry children, lonely seniors and youth in hospitals on a daily basis.

To nominate a brother who should be recognized with this award, send an email that answers the following questions to character@sigmachi.org.

Also provide the name and contact information of someone with whom the nominee has worked while volunteering on a project.

The Generation to end Cancer

Named in honor of renowned philanthropist, the late Order of Constantine and Significant Sig Jon Huntsman Sr., PENNSYLVANIA 1959, and his family, the Huntsman Cancer Institute at the University of Utah has furthered Huntsman’s life goal of combatting and eradicating all forms of cancer.

The loss of his mother to breast cancer was something that motivated Jon Huntsman Sr. throughout his life. The commitment of more than $300 million from Huntsman and his family toward HCI has helped provide Utah and the western states with one of the best cancer hospitals in the world, and one of the most comprehensive cancer research centers, since HCI’s creation in 1995.

Knowing that 1 in every 2 men and 1 in every 3 women will get cancer during their lifetimes and the importance of the research being done at HCI, Sigma Chi officially announced during its 150th anniversary celebration in 2005 that it was partnering with Huntsman to make the Huntsman Cancer Foundation the preferred charity of the Fraternity.

In 2012, Huntsman Cancer Foundation was designated as the Fraternity’s sole preferred philanthropic partner, and, in 2015, Sigma Chi made history with the largest-ever philanthropic commitment from a Greek-letter men’s organization with an $11 million pledge — over $10 million of which has been raised in less than five years.

During the 2018 to 2019 Huntsman Challenge fundraising cycle, Sigma Chi chapters collectively raised more than $2.35 million for HCI. And, for the first time in the campaign’s history, three chapters surpassed the $100,000 milestone.

This commitment was furthered during Sigma Chi’s 82nd Grand Chapter in Salt Lake City as the Fraternity surpassed its prior historic commitment with an additional $20 million pledged towards HCI’s Women’s Health Center and Research Wing through 2030.

The Sweetheart of Sigma Chi

The Sweetheart of Sigma Chi is more than a famous song written in the 1920s, it is the description of important young women who serve in leadership roles assisting philanthropic, recruitment and volunteer causes within Sigma Chi. 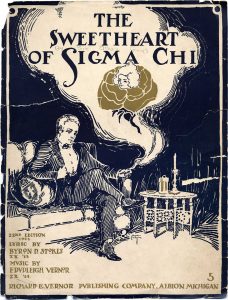 Chapter sweethearts are chosen in a variety of ways according to each chapter’s protocol. The nominees can be anyone that would serve as an ambassador for the chapter, and are often voted upon based on a set of criteria.

Every two years, at each Grand Chapter, the Fraternity selects one of the chapter sweethearts to serve as the International Sweetheart for the following two years.

Criteria include personality, character, scholarship and campus activities, and the recipient plays a significant role in the philanthropic efforts benefitting the Huntsman Cancer Institute.

Written by Sigs Byron Stokes and Dudleigh Vernor, the song The Sweetheart of Sigma Chi was a major hit song in the 1920s and 1930s, inspiring two films by the same name in 1933 and 1946.

The first official naming of a sweetheart by the General Fraternity took place at the 47th Grand Chapter when Barbara Tanner of Michigan State was chosen from six finalists to serve the first two-year term.

“The girl of my dreams is the sweetest girl, of all the girls I know ..”

The Sweetheart of Sigma Chi

The chapter sweetheart has the opportunity to make a great impact on the chapter that she serves. Former International Sweetheart, Amy Jackson, has created some resources for you to download. As sweetheart, you have a perspective that no one else in Sigma Chi can offer. Here are her tips about how you can positively affect your chapter:

At the 2017 Grand Chapter, undergraduate delegates voted Allie Hagemeyer the Fraternity’s 2017 to 2019 International Sweetheart. Allie graduated from the University of Cincinnati in 2017, where she majored in architecture. She is a member of the Kappa Kappa Gamma Sorority and works at an architecture firm in Cincinnati.

You may email Allie with questions or requests for visits here. You can also contact Headquarters here with questions for Allie. Please keep in mind that should you wish to host a visit for the International Sweetheart, the chapter is responsible for covering all of her travel expenses.

More on the Women of Sigma Chi

From the American Civil War through the war on terrorism, Sigma Chi members have served and paid the ultimate sacrifice with their lives for the United States and Canada through many military conflicts.

The Sigma Chi Foundation recognizes honorably discharged or currently serving members of the armed forces with the Sigma Chi Military Service Recognition Pin. The White Cross we wear is an emblem of sacrifice, and the virtues displayed through one’s service to country brings honor to Sigma Chi.

The Foundation also awards an annual military scholarship award for current undergraduate or graduate student Sigs that are serving their school’s ROTC, reserves or joined the Fraternity while on active duty or following service to one of the military branches.

After disdaining enemy hand grenades, a close-range machinegun, pistol and rifle, Britt inspired and led a handful of men in repelling a counterattack from 100 Germans on November 10, 1943. In lieu of serious injuries, Britt wiped out an enemy machinegun crew and helped capture a number of Germans while enabling the escape of captured Americans. For his actions he received the Congressional Medal of Honor.

While serving as a radio operator-airgunner on a heavy bombardment aircraft in December 1943, Vosler was wounded in the legs, thighs, chest and face. With pieces of metal lodged in both eyes, he kept firing his guns, was able to repair an inoperative radio set and send out distress signals despite lapses into unconsciousness. For his actions he received the Congressional Medal of Honor.

Prince helped plan the rescue of the Cabanatuan Prisoner of War camp in the Philippines, and was personally responsible for the rescue of over 500 Bataan Death March survivors through his rescue plan and direct action. The principles of his plan are still taught today at West Point. James Franco portrayed Prince in the film The Great Raid. He received the nation’s second-highest award for valor, the Distinguished Service Cross, for his involvement.