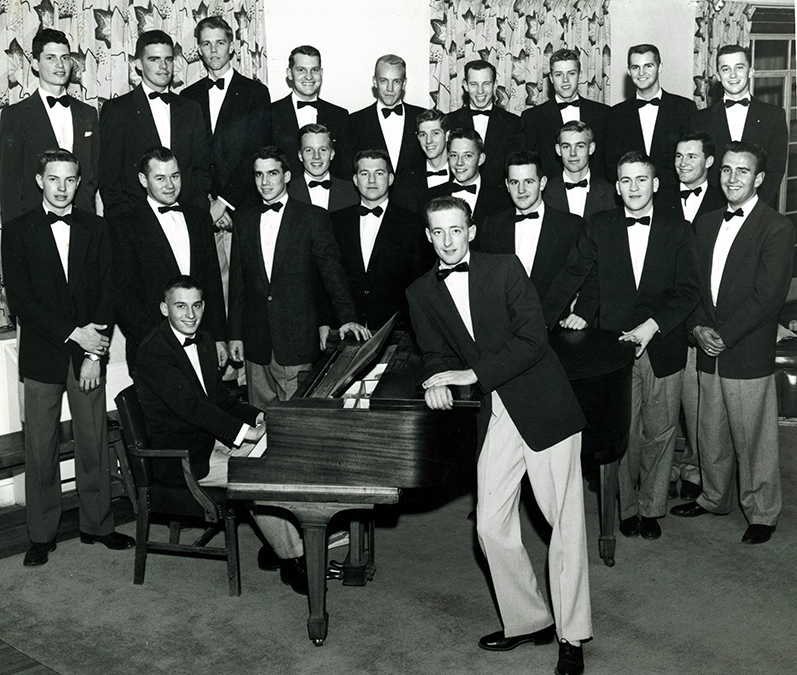 Below is an ongoing list of Sigma Chi songs. More songs’ words are included, and information for each will be added periodically. The songs are arranged alphabetically into six categories. As you can see, there are several songs focusing on the sweetheart, but there are also marches, banquet songs, and fellowship songs, as well as a Christmas song and one instrumental, “The Sigma Chi Waltz,” which is one of the oldest Sigma Chi songs in existence.

One recent songbook–entitled Five Score and Five, edited by Jack E. Pearson and published in 1961 by the Sigma Chi Fraternity–contains many of these songs and a few other specific chapter songs; however, this book is now out of print. There have been several Sigma Chi songbooks, the first being proposed in 1865.

Thanks to the Detroit Alumni Chapter for including the words to several of the songs listed below.

"The Daughter of the Sweetheart of Sigma Chi"

"I'd Love to have a sweetheart"

"The Mother of Sigma Chi"

"The Rose of Sigma Chi"

"The Sweetheart of Sigma Chi"

"Sweet May Thy Slumbers Be"

"He's the Guy From Sigma Chi"

"I'm Blue for the Blue and Gold"

"My name is sigma chi"

"Sigma Chi was my first love"

"Then here's to our fraternity"

"The White Cross of Sigma Chi"

"Sing a Song to Sigma Chi"

"The March of Constantine"

"March of the Sigs"

The first comprehensive Songbook of the Sigma Chi Fraternity was published in 1884. Its contents included forty-eight songs, most of which were written by brothers of the Beta Chapter at Wooster College. However, the idea of a songbook was suggested in 1865, but nearly twenty years passed before the idea became reality.

At the fifth Grand Chapter in Cincinnati in April, 1865, the Phi delegation from Lehigh expressed the desire to have an official songbook (II, 311). Robert E. James made a motion in which each chapter “should send at least one song set to music to the Phi chapter”; from these would be selected those to be published (II, 458).

There was, however, little response from other chapters, so most of the songs in the first book were primarily those written by members of the Phi Chapter. In 1872 the Songs of Phi was published; it became the first cloth-bound volume of songs issued by the Fraternity. Songs of Phi contained eighteen songs. Edwin A. Barber wrote eight, including “Greeting Song,” “Wednesday Night” (meeting night), “Friendship Offering,” “Guarding the Cross,” and “The Blue and the Gold”; John E. Watkins contributed “The Cross” and A. Kirkland Michler penned the “Banquet Song” (II, 579-580). Although this songbook was useful to several chapters, it was still not as comprehensive as was first desired.

Xi Chapter at Indiana then volunteered to develop a new Songbook, but they too had the same problem collecting songs from other chapters. Then, in 1882, when Beta Chapter honorarily initiated (it was allowed at that time) Dr. Karl Merz, the new director of music at Wooster, the Beta Sigs became involved and the project was theirs. Merz had recently completed “The Sigma Chi Waltz” and had gained great interest in the fraternity (III, 251-252).

Two years later, at the 1884 Grand Chapter, the Songbook of the Sigma Chi Fraternity was distributed to delegates and used at the banquet; this was the first time “A Loyal Sig,” better known as “A Sig I Am” was sung. Included in the forty-eight song collection were “In Hoc Signo Vinces” by Burton O. Squires (Gamma ’83), “The Cross of Sigma Chi” by Alfred F. McCormick (Gamma ’84), the “Banquet Song” by Walter F. Fiske, and “Our Bill” by William A. Heath (Kappa Kappa ’83) (III, 405-407).

All references used come from The History of Sigma Chi by Joseph Nate, volumes I, II, III, and IV.

The Sweetheart of Sigma Chi (Song)

Written in 1911 by two undergraduates at Albion College in Michigan, “The Sweetheart of Sigma Chi” has become the most popular college fraternity song in history. The site of the writing of the song was Dickie Hall on the campus of Albion. Byron D. Stokes, Albion 1913, wrote the words one June day while in class. He took the words to his Sigma Chi Brother F. Dudleigh “Dud” Vernor, who was practicing the organ in the campus chapel; Vernor completed the music that day. It was written for the 25th Anniversary Reunion in June 1911 of Alpha Pi Chapter. It was first sung by Harry H. Clifford, Albion 1911, who designed the drawing on the original sheet music, published by Richard Vernor, Albion 1913, brother of Dud Vernor.

Stokes was asked by many people “Who is the girl who was the inspiration?” He answered it was no one in particular. “The `Sweetheart’ is the symbol for the spiritual ingredient in brotherhood. It was the Sigma Chi Fraternity itself that inspired the song. I wrote the words not long after my initiation, and the magic of our Ritual with its poetic overtones and undertones was, I suppose, the source of my inspiration.”

Stokes later served Sigma Chi during the years 1916-1920 as Executive Secretary, Grand Editor, and Grand Historian, and retired in Pasadena, California. Vernor was organist for the Metropolitan Methodist Church in Detroit for over 50 years. Ironically, although the two collaborated on this classic song while undergraduates, they never saw each other after college: “Our paths simply have never crossed,” Vernor said in 1955. However, the two collaborated on at least two other Sigma Chi songs: “The Fellowship Song” and “I’m Glad I’m a Sigma Chi”; the latter was dedicated to Sigma Chi Brothers who fought in World War I. (Both songs are included with other Sigma Chi songs at this site.) Both died in 1974, Vernor at the age of 81 and Stokes at the age of 87. (See also The Centennial History of Sigma Chi: 1855-1955 by Robert M. Collett, pp. 279-281, and History of the Sigma Chi Fraternity by Douglas Richard Carlson, pp. 368-370.)

Just about every Sigma Chi knows the first verse and the chorus of “The Sweetheart of Sigma Chi,” but how many of you know the second verse!

Almost as popular as Waring’s recording was one by Gene Austin, the most popular singer between 1925-1930. Austin was born in Gainesville, Texas, in 1900 and began his entertainment career in vaudeville. When he gained nationwide popularity in 1925, he was known as “The Voice of the Southland.” His recording of “My Blue Heaven,” the biggest-selling, non-holiday song before rock and roll, was popular at the same time as his version of “The Sweetheart of Sigma Chi.”

Verse 1
When the world goes wrong, as it’s bound to do
And you’ve broken Dan Cupid’s bow.
And you long for the girl you used to love
The maid of the long ago.
Why, light your pipe, bid sorrow avaunt
Blow the smoke from your altar of dreams
And wreathe the face of your dream girl there
The love that is just what it seems

Refrain
The girl of my dreams is the sweetest girl
Of all the girls I know.
Each sweet coed, like a rainbow trail
Fades in the afterglow.
The blue of her eyes and the gold of her hair
Are a blend of the western skies;
And the moonlight beams on the girl of my dreams
She’s the Sweetheart of Sigma Chi.

Verse 2
Ev’ry magic breeze wafts a kiss to you
From the lips of your “sweet sixteen.”
And one by one the maids you knew
Bow to your Meerschaum Queen.
As the years drift by on the tides of time,
And they all have forgotten but you,
Then the girl of your dreams the sweeter seems,
She’s the girl who is always true.

There have been two movies called The Sweetheart of Sigma Chi. The first was made in 1933, and starred Buster Crabbe and Burr McIntosh, both Sigma Chi and Signficant Sigs, and included some other Sigs in supporting roles. The song is sung in the movie several times by Ted FioRito, a popular bandleader of the 1930’s. The movie’s plot is pretty corny, but it’s nice seeing Sigma Chi stuff in various scenes.

In 1946, another movie musical The Sweetheart of Sigma Chi was released. It starred Elyse Knox, the Sweetheart of Alpha Epsilon Chapter. Although the song was sung in the film by Phil Brito and played in the background, another song from the film became a number one hit for Frank Sinatra: “Five Minutes More.” The film was shown to delegates at the 60th Grand Chapter in St. Louis in 1975.