the road to hinman avenue

Two generations ago, the men of Sigma Chi dedicated the current headquarters building here at 1714 Hinman Avenue in Evanston, Illinois. After four decades at the same location, it is hard to imagine a time when the headquarters led a somewhat nomadic existence as it roamed from place to place in search of a permanent home. 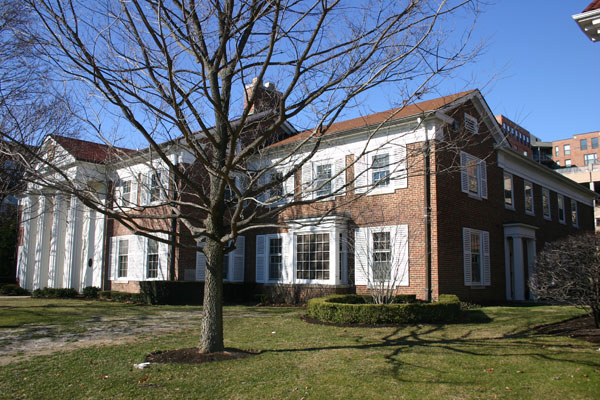 In the years following the adoption of a centralized from of government during the early 1880s, the records of the fraternity moved from place to place in the company of the Grand Officers of the era. Fraternity records were often lost, so the Fraternity began to consider the need for a headquarters very early.

About 1914, the first Executive Secretary (now known as the Executive Director), Frederick Grabner, Beloit 1911, established the first headquarters in the Chicago Loop at 208 S. Lasalle Street. Over the next two decades, the headquarters moved three to four times before finally finding a home in the Pure Oil Building at 35 E. Wacker Drive  on the Chicago Riverfront in 1935. The previous addresses were: 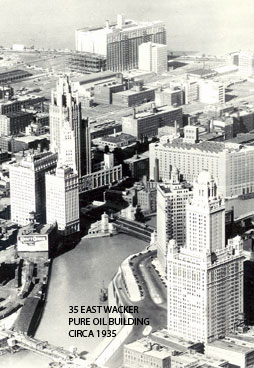 By the late 1940s, the fraternity had 19 employees, a growing collection of Sigma Chi artifacts, and occupied over 3000 square feet of office space in the Pure Oil Building. In 1948, with the prospect of moving again, and the high cost of office rental in the Chicago loop, the Seattle Grand Chapter passed a resolution to find a permanent home for the headquarters by the time the lease expired on Wacker Drive in April of 1951.

The headquarters came to Chicago in the early 20th century because of its location—all roads led to Chicago in that era. This was still true in 1948, but the Fraternity briefly considered the option of returning to its home in Oxford, Ohio. Ultimately, Oxford was eliminated because it still did not fulfill the needs of Headquarters operations. “With true regret,” that a return to its birth place was impractical, the Committee on a Permanent Headquarters forwarded its recommendation that it was best to remain in Chicago.

The committee considered two Chicago locations—both outside the Chicago loop where even then prices were beginning to skyrocket. At the same time, members of the committee visited Sigma Alpha Epsilon’s headquarters in Evanston. They were impressed with what the small city so close to Chicago had to offer and on May 31st, 1950, Sigma Chi purchased the former Harley Clarke mansion at 2603 Sheridan Road.

The headquarters occupied the Clarke mansion on February 24, 1951, secured in the knowledge their beautiful, spacious, new home would serve them for many years to come. It was not to be. Only a decade later, the city of Evanston sought to expand their lakefront park and approached the fraternity to acquire the beach on the property—by condemnation if necessary. The Executive Committee considered a legal challenge, but ultimately decided against it. They sold the entire property to the city and again began the search for a new home. 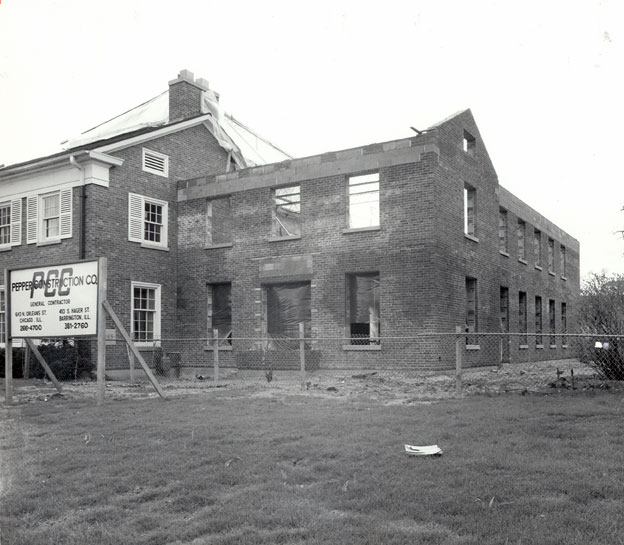 “Thoughtful consideration of such factors as mail service, transportation, availability of needed supplies and services, proximity to the center of population, retention of the present staff, building and operating costs, and a college environment where Sigma Chi has a chapter, led the Committee to unanimously recommend that the new Headquarters be located in the Chicago area. A subcommittee was appointed to locate a specific site for the committee’s consideration.”
Magazine of Sigma Chi, April 1965

The Fraternity again considered Oxford, Ohio, but also considered Oxford neighbors Cincinnati and Dayton, Ohio as well as Indianapolis, Indiana and such far-flung locations as Washington, DC, Chattanooga, Tennessee, Kansas City, Missouri, and Denver, Colorado. Responding to favorable tax considerations from the City of Evanston, the committee again recommended Evanston, Illinois. The current headquarters did not start life as a residence or office building. The Fraternity acquired the land at 1714 Hinman with the intent of building a state-of-the-art headquarters building from the ground up. In May of 1965, the Sigma Chi Foundation broke ground on the new building and the current headqarters opened it doors on October 30th, 1966.

In the intervening years headquarters staff and responsibilities continued to grow and a second wing was added in 1980 increasing its space by 60%. Now, at the start of a new century, the headquarters now employs approximately 60 people in both its Fraternity and Foundation operations. Someday, another move may be considered. Meanwhile, we reflect on the quirks of history that brought us here and remember the generations of Sigma Chis who have passed through the portals in forty years on Hinman Avenue.

executive directors of the fraternity

@=Approximately. The Initiative compiled this list from Fraternity records, Robert Collett’s Centennial History of Sigma Chi, and the directory listings in The Magazine of Sigma Chi. In some cases, exact dates were unavailable, so the date listed reflects the issue of The Magazine when the listing first appeared.