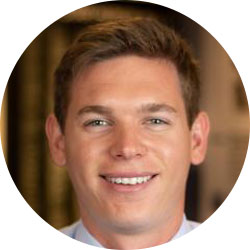 Chris was initiated on Nov. 23, 2013, into the Eta Beta chapter at California State University, Long Beach, as a founding father of the chapter. He graduated with honors from the university in 2018 with a bachelor’s degree in construction engineering management and a minor in communications studies. During his undergraduate career, Chris was elected to the offices of Magister, Consul and Pro Consul for his chapter. He also was a President’s Ambassador for the university president’s office. Chris has served his chapter and Fraternity by graduating from the Horizons Huntsman Leadership Summit, attending multiple Balfour Leadership Training Workshops, and by being a voting undergraduate delegate to the Grand Council  and Grand Chapter. He is a Province Balfour Award Winner and a Life Loyal Sig. Outside of the Fraternity, he has worked for respected engineering and commercial contracting companies.

As a regional chapter support coordinator, Chris works within the undergraduate services department to provide guidance to the Fraternity’s undergraduate chapters in his region and the Fraternity at-large by assisting them and their volunteer advisors in fulfilling the goals set forth in their strategic plans. Serving as an ambassador for Sigma Chi, he works closely with the Fraternity’s Grand Praetors, or regional governors, and chapter advisors to assist the undergraduate leadership with various aspects of their chapter’s operations and facilitates relationships between the chapters and university partners. Chris oversees region 9 which includes undergraduate chapters in the Southern California, Los Angeles Coastal, Grand Canyon, Southwestern and Utah/Nevada provinces.